Deziel’s has been serving taxpayers in the Minneapolis and St. Paul, Twin Cities area since 1991.

We have come to specialize in self employed and small business tax returns for artists, writers, musicians, performers and related production workers. We also do returns for taxi drivers, delivery truck drivers, sales people and many other independent businesses. We are familiar with the proper reporting of investment income as well as income or loss from rental income properties. We are also experienced with the full range of credits including: Earned income Credit, Child Tax Credit, Childcare Credit, Education Credits, Adoption Credit, Residential Energy Credit, and Retirement Savings Credit.

We are geared up to quickly prepare state tax returns for Minnesota, Wisconsin, Illinois, Iowa and North Dakota. Other states will take us a bit longer to prepare. State returns are prepared along with your federal return. We do not file state returns separately, unless a client is just applying for a Minnesota Property Tax or Rent Refund.

At Deziel’s we stand behind our work and are available to help you throughout the year by answering questions or solving problems with the IRS or state revenue departments. If you receive a correction notice or an audit notice contact us right away. Although notices can be aggravating and intimidating; most of the time issues are solved rather easily. If you are audited call for Mark Deziel as soon as possible. He will go with you and has never charged any additional fee for attending an audit.

We assume you want to claim all of your legitimate deductions to get that biggest tax refund from a experienced and reliable preparer. When you come to Deziel’s Tax Service you can be confident that your return is accurate and done correctly.

We collect information we receive from you on applications, tax organizers, worksheets and other items you provide. We do not disclose any nonpublic personal information

Nearly seventy years ago John Weinard started doing income tax returns for clients in the back of a drug store in South Minneapolis. After acquiring some experience and a very loyal clientele, Mr. Weinard established an office on 4th Street. After the construction of 35W took out his 4th Street office, he relocated to 1922 Clinton Avenue South.

In his first year out of college Mark Deziel trained as a preparer and was working for a firm called Mr. Tax. While doing a co-worker’s return at the laundromat next door, he learned that John Weinard was looking for help. Mark worked for John for the next 13 years.

After the Nicollet building was sold, we opened for three years in Calhoun Square. We moved furniture and equipment into storage and worked from home in the off season. This pattern functioned well for us and helped hold down operating expense.

In 2002 we moved to Rosedale Center continuing the same pattern of officing from home in the off season. After 17 successful years at Rosedale, they could not find space for us, so we have had to move.

Now we have found a new office for the tax season at Maplewood Mall. We have come to appreciate the friendly and exciting family atmosphere of the mall and hope to keep it our home for a long time. 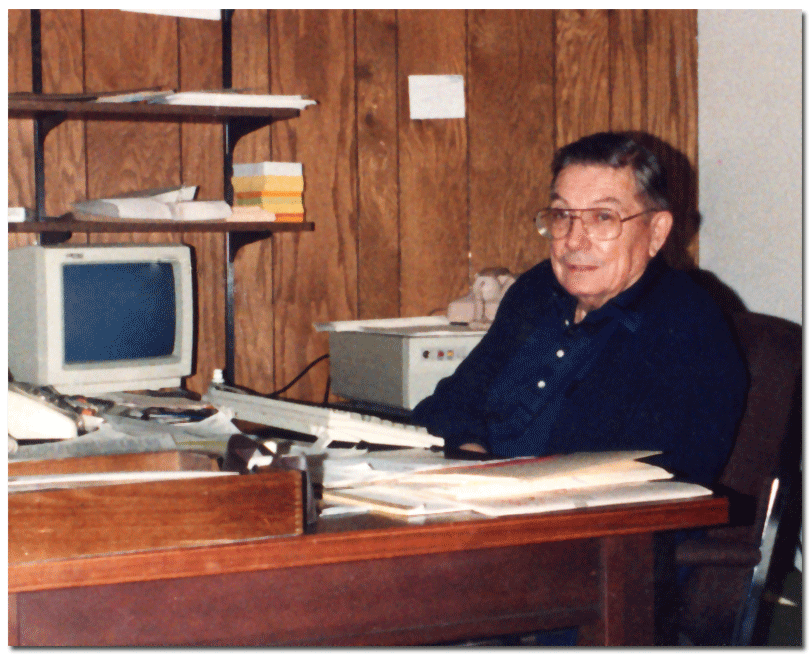 at the reception desk of his office on Clinton Avenue, Minneapolis,
some time in the late 1980’s.

John Weinard was born in August of 1916 and grew up with his family on Nicollet Island. John’s father made a living selling and installing wallpaper. John often recalled to me how his dad would go into the caves under the Island to fix the plumbing in their family house. John was impressed with how his father knew just where to go in the caves to find the right valves to shut off the water.

When John was twelve years old he was carried off by the current of the Mississippi river and nearly drowned. Though traumatic, it did not stop him from competitive swimming in college or from his favorite summer pastime: fishing.

John often recalled to me how his time in the CCC’s (Civilian Conservation Corp) were some of the best years of his life. He loved the hard work, discipline and energy. He learned to love nature and the camaraderie of the young men his own age. He also liked the way he could save the money that paid for his education at the U of M.

During WWII and even for a bit afterwards John, worked as a civilian in a U.S. airfield in Greenland. He married Margaret and they raised four children: John Jr., Susan, Bruce and Sandy. They lived in Philadelphia for a time, then Chicago,and finally resettled in the Minneapolis area. John built a successful career in bookkeeping and financial matters working for Grayco and culminating as, more or less, the CFO of Horton Manufacturing Co.

As a side business John began doing tax returns professionally. By taking a deep and genuine concern for each of his clients, John built a solidly loyal following of people from all walks of life. Stock brokers, policemen, factory workers, teachers, nurses, truck drivers, barbers, janitors, construction workers, pensioners, day laborers, you name it…even a lion trainer came to rely on John to do his or her return. As the south Minneapolis neighborhood diversified, and as we moved out to Calhoun Square, and then to Rosedale John prepared returns for people from all over the globe. Egyptians, Oromos, Laotians, Guatemalans, Indians, Mexicans and Tibetans asked for John or asked how he’s doing

On December 19, 2010, John Weinard passed away. He had been in hospice for a month prior and all of his children were able to see him on his final day.

Everyone will admit that 94 years is a good run; still we miss him deeply: and we will continue to for a long, long time. I will always remember how John treated each person as a person; and what that meant to each of us.

Deziel’s has been serving taxpayers in the Minneapolis and St. Paul, Twin Cities area since 1991.

In prior years the IRS would give an expected day for your refund to arrive. With the changes this year the only thing they are saying is that it sould come in about 3 weeks. Minnesota should be more prompt.